For me programming against the AT command interface of the GPRS Shield shield is difficult, I was able to implement a simple happy case for a TCP/IP connection but for a 24/7 unattended sensor device, that should just work, also catching all the other paths and particularly reconnecting after some issues is important. So I searched for libraries but did not find one that works well with my GPRS Shield. Most of the libraries I found used pins like RESET or Status which are not accessible on my GPRS Shield.

I decided to look for an other GPRS breakout. I chose for an Adafruit FONA since this includes a library with TCP/IP support out of the box and provides a small footprint.

I started with an Arduino UNO, which was perfect because I always have one of them in my tinkering box and Arduino provides you lots of libraries. But already after my first steps I see that the limited 2K SRAM of the Arduino UNO could provide a challenge. Already my first sketch with GPRS, display and current sensor used 87% of the SRAM for global variables. So avoid to spend endless time with optimizing memory usage, I decided to look for an other controller MCU.

I decided to look for an other controller MCU to avoid to spend endless time with optimizing memory usage. I chose for and Adafruit Feather M0 Basic Proto which supports the Arduino ecosystem, uses like the Arduino Zero an ATSAMD21G18 ARM Cortex M0 processor with 16x the SRAM (32K) of an UNO and provides a small footprint which will help to but everything into a enclosing.

So it was time to use my Adafruit gift certificate to get the parts to continue with the next steps of my project. And a little more that a week later I received a parcel: 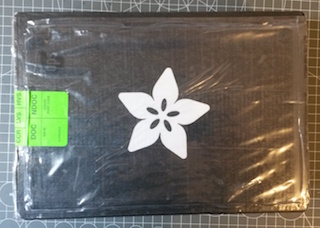 Now my prototype for the solar monitor sensor device looks like this: 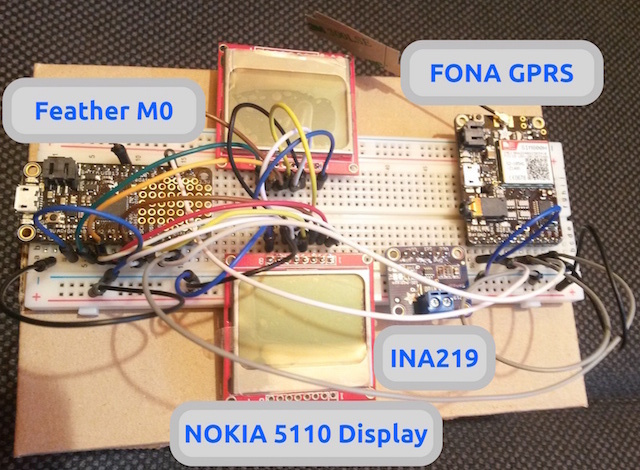