This is the final wrap-up post for my Eclipse Open IoT Challenge project. I set out to build a maker friendly DIY IoT home automation solution, driven by my dissatisfaction with the humidifier control plugs I owned.

So as a proof of concept for my maker friendly DIY IoT home automation solution I built a simple IoT air humidifier: 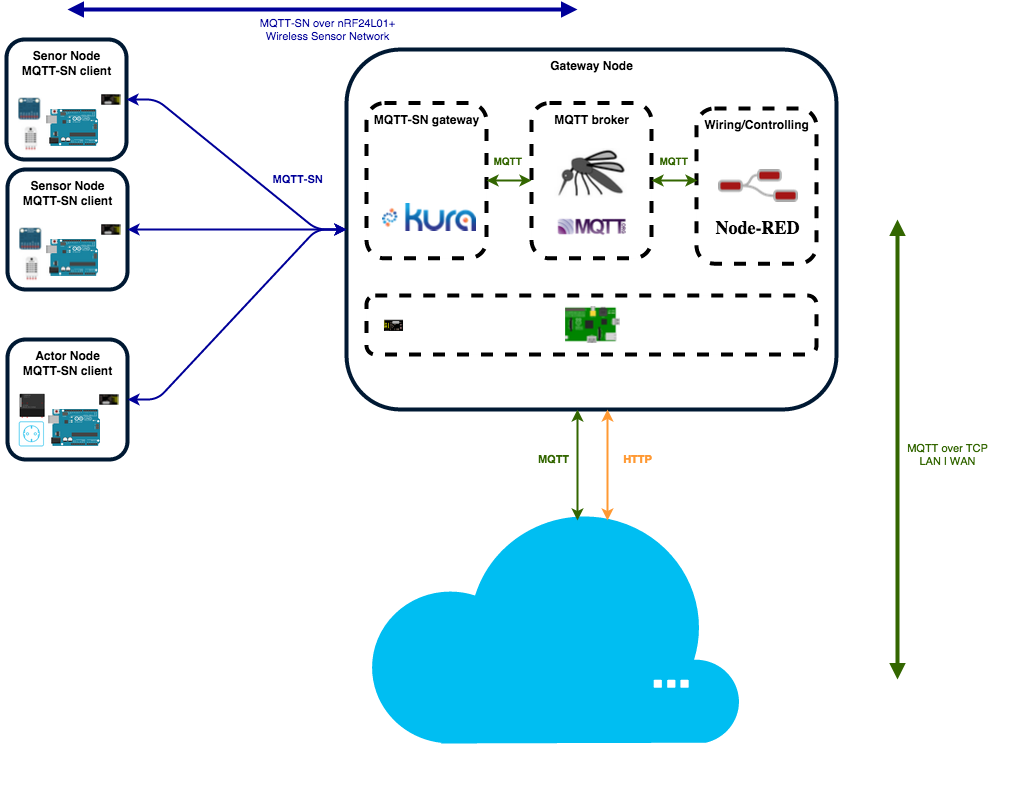 This shows the overview of what I built which is nearly the same picture as in my project idea post. I did not manage to build and setup everything I had in mind. Due to lack of time I skipped the connection to the various cloud services but I think it is simple to set them up trough configuring bridges on the Mosquitto broker or creating some forwarding flows in Node-RED.

All the source code for my project can be found on

But now to the details of what I built: 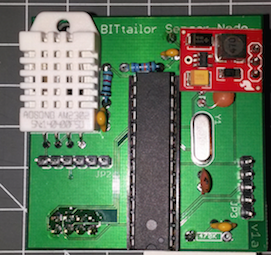 For the sensor node I created its own PCB that connects:

The sensor node software is built with the Arduino programming platform. Besides the Arduino UNO core it uses the following libarries:

The code of the sensor node is here. It publishes regularly the temperature and humidity with MQTT-SN over the wireless sensor network. 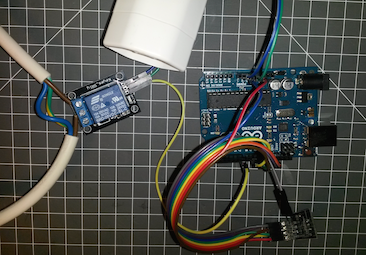 The actor node is currently just built as a prototype using a relay connected to an Arduino Uno board to switch a power line. The nRF24L01+ is used to communicate over the wireless sensor network.

Also the sensor node software is built with the Arduino programming platform. The code of the actor node is here. It uses MQTT-SN over the wireless sensor network to subscribes to a topic to control the relay. 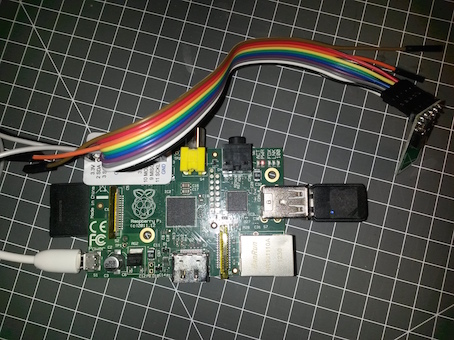 The gateway is built with a Raspberry Pi. The nRF24L01+ transceiver module is connected trough SPI.

There are three main services on the gateway:

This is the application I built with the Kura framework. It gateways the MQTT-SN messages of the wireless sensor network to MQTT messages forwarded to the MQTT broker. The gateway is made up of three OSGI bundles:

It does not yet provide:

Furhter the wireless sensor network limits the maximum length of a MQTT-SN message to 29 octets.

Installed node.js on the Raspberry Pi and then Node-RED via npm.

The wireless sensor network is built with the nRF24L01+ transceiver modules. The transceiver provides a link layer that features automatic acknowledgement and retransmissions of packets. On top of this a tree based network layer, where each node has one parent and five child nodes, is implemented on the nodes and on the gateway. No fragmentation and reassembly is implemented in the network layers. Currently broadcasting and encryption are not implemented yet.

As always I completely underestimated the time I need to implement my ideas. I spent quite some time on understanding or fighting with Tycho and the hole build chain while working with Kura. It was nice that the Kura forum helped me with the (sometimes strange) questions I asked. I could even give a little bit back to the Kura community by my pull request that got meregd to Kura and fixed the SPI jdk.dio.policy.

I think the Kura framework provides a good platform to implement the MQTT-SN gateway. My MQTT-SN gateway is still in a prototype stage and missing some features. It is also too tightly coupled to my wireless sensor network implementation. I think this coupling could be removed and generalized so that other networks like UDP or ZigBee could be plugged in.

I choose to implement my own wireless sensor network based on the nRF24L01+ transceiver modules because they are very inexpensive, are low power and I had a lot of them laying around. I’m not sure that it is the right way to continue, since it puts quite a burden on the sensor nodes to implement the network layer and it is still lacking some important features like encryption, broadcasting, fragmentation and reassembly.

I hope somebody enjoyed reading my posts. I for sure enjoyed working on my Eclipse Open IoT Challenge project and I’m still eager to further play with IoT.